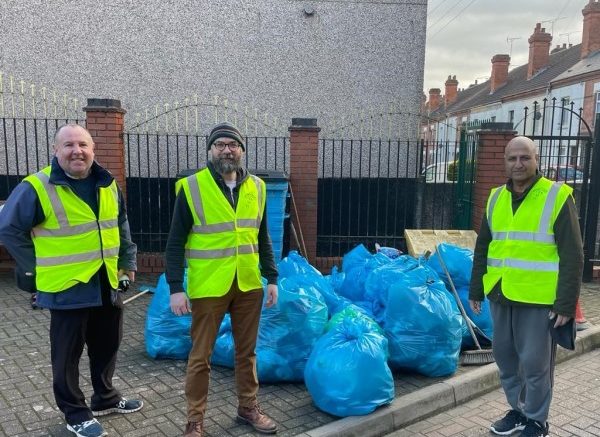 A city mosque and youth group joined forces to tidy up their neighbourhood’s streets.

The Masjid-E-Zeenat Ul-Islam Mosque in Cambridge Street, and the Rising Stars Youth Group from Foleshill, decided to hold the community event to bring people together and restore some pride in the local area.

Litter had built up, and so 20 volunteers took to the streets and collected the grand total of 30 sacks full of rubbish from Cambridge Street, Stoney Stanton Road, Harnall Lane, and Leicester Causeway.

Cllr Welsh said: “Sadly the streets had become covered in litter and the area was looking in need of some help, so the Mosque and Rising Stars kindly decided to take action and restore some community pride and we were delighted to take part.

“The volunteers did an amazing job and worked really hard. It has made a great difference and was such a success that there are already plans to hold further events.

“St Michael’s is a great local community where people work together, and we’d like to thank all at the Mosque and Rising Stars and the volunteers for showing that community spirit and helping their neighbourhood and the city.”

Asif Takolia, a member of the Masjid Zeenat Islam Management Board, said:  “The clean-up was a great success and helped people to feel pride in their neighbourhood. Now we want to build on that positive impact and continue to work with residents, organisations and councillors to create an even stronger community spirit.

“Everyone agreed that next time we could cover even more streets and involve more people. The Mosque is looking forward to growing as a community hub and staging events to benefit all in the area and giving them a neighbourhood to be proud of.”