The first known reference to Holy Trinity Church is in 1113. Its beginnings are tied into the history of the Benedictine Priory of St Mary which was associated with Earl Leofric and Lady Godiva. 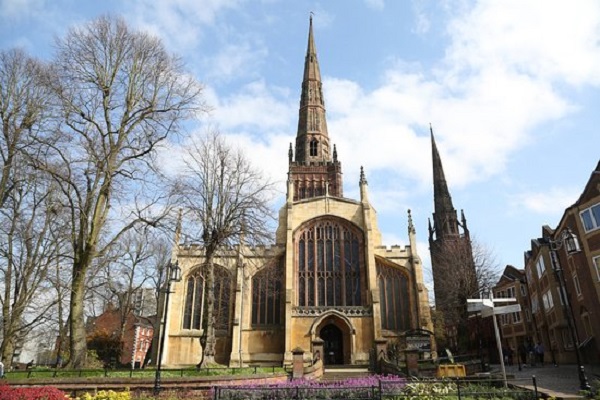 The church appears to have originally been established next door to the Priory to act as a “side chapel” to the priory church and for the use of the priory’s tenants.

The original Norman church was all but destroyed in a fire in 1257. The North porch was the only part of the original building to survive and is still in use today. The rest of the church was entirely rebuilt during the 14th Century. The walls were brightly painted, helping those churchgoers who could not read to understand the messages of the bible.

One example of this ancient artwork still remains. During the 1430s, the painting of the Last Judgement was created above the tower arch to demonstrate the eternal consequences of both charitable and uncharitable acts. The painting has twice disappeared from view across the centuries but, after years of painstaking restoration, it was finally revealed in 2004. Find out more about the painting here.

The church underwent massive upheaval during the Reformation in the reigns of Henry VIII and his son Edward , losing most of its priests and many of its treasures.