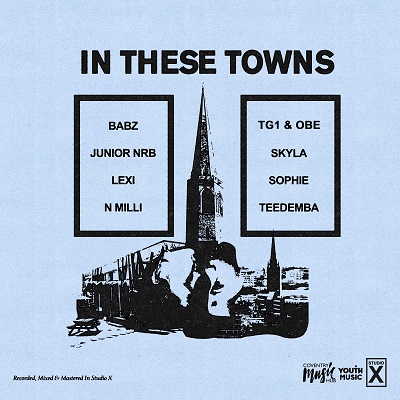 Next Wednesday (11 January), a group of young people from across Coventry will be releasing a pioneering collaborative album called ‘In These Towns’.

In These Towns features eight songs from some of Coventry’s finest young musicians. The album incorporates multiple genres including Spoken Word, RnB and rap.

Thematically the album tackles a number of difficult subjects including loss, grief, identity and gang violence. Each of these subjects is engaged through the young person’s unique and powerful viewpoint.

The album, which was recorded at Coventry venue Studio X and was produced by JAY1’s producer ‘Coolie’, is a product of Coventry Music Hub’s Positive Choices project.

The Positive Choices project is a scheme which aims to support children and young people in the city by involving them in a number of creative, musical after school sessions.

As the birthplace of 2-tone and pioneering bands like The Specials, Coventry has a rich musical heritage. Now, thanks to the Positive Choices Project, the next generation of musicians are also adding to that legacy.

Cllr Dr Kindy Sandhu, Cabinet Member for Education and Skills, said: “I’m tremendously proud of these young people. Creating an album like this, which tackles so many difficult issues, requires a great deal of skill and hard work.

“It’s important to us here in Coventry that our children and young people have the opportunities to learn new skills outside of the classroom. That aim is at the heart of the Positive Choices project, it’s about giving young people a creative outlet which nurtures their talent and focuses them in a productive way.

The album releases next week, and you will be able to find it on Spotify, YouTube and Soundcloud.

The Positive Choices project is funded by Youth Music and is delivered by the Music Hub in collaboration with local schools, West Midlands Police and the Violence Reduction Unit.

For all the latest with the Coventry Music Hub, please visit their website: https://www.coventrymusichub.co.uk/