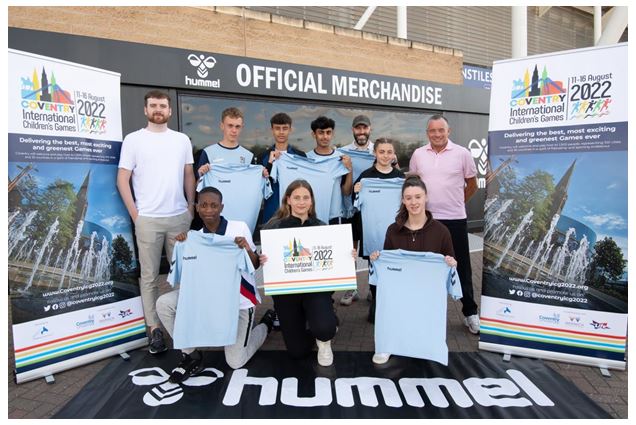 Hummel UK, the global sports apparel brand, has been appointed as the official apparel sponsor for Team Coventry during the International Children’s Games 2022 (ICG 2022).

Alongside Team Coventry, ICG 2022 officials, volunteers and participants will all receive a commemorative, branded, Games t-shirt courtesy of hummel UK.

Hummel UK is renowned globally for its community engagement and enablement, promoting equality and diversity throughout its global market. The sponsorship of Team Coventry for ICG 2022 enhances the Games that is set to attract almost 1,500 participants from 73 cities in 33 countries.

Team Coventry will be showcasing their hummel UK apparel that is tailored to each sport throughout the Games. The team will be kitted out for all seven sports along with team tracksuits, sports bags and caps.

Cllr Abdul Salam Khan, Deputy Leader, Coventry City Council and Chair of the International Children’s Games Stakeholder Board, said: “What a fantastic partnership we have created for the International Children’s Games. Having the same apparel provider for Team Coventry as some of the elite sports teams in the city is going to be great for the athletes.

“They are going to feel one million dollars in their kit and I really look forward to seeing our athletes representing Team Coventry across each of the seven sports.”

2022 sees the biggest Team Coventry ever entered into the Games with 85 athletes representing the city.

James Golden, Head of Teamsport Hummel UK and Ireland, said: “We are thrilled to partner with the International Children’s Games to become the official technical supplier for the Games held this year in Coventry.

“We feel this partnership is a perfect fit for Hummel UK whose mission is to change the world through sport. We encourage you to join us between 11 and 16 August for a fantastic six days of sport.”

Hummel UK’s support for Team Coventry strengthens the brand’s links within the region in which it is sponsor of Coventry City Football Club, Wasps Netball Club and Wasps Rugby Club, amongst other clubs in the area.

More information on the International Children’s Games can be found on the website.

The Council is writing to a number of Coventry residents who may be eligible for Pension Credit. Coventry Gov UK Latest News …

Armed Forces Day will be held next week, with a parade and service in the city to help people say thank-you to those who serve. Coventry Gov UK Latest News …