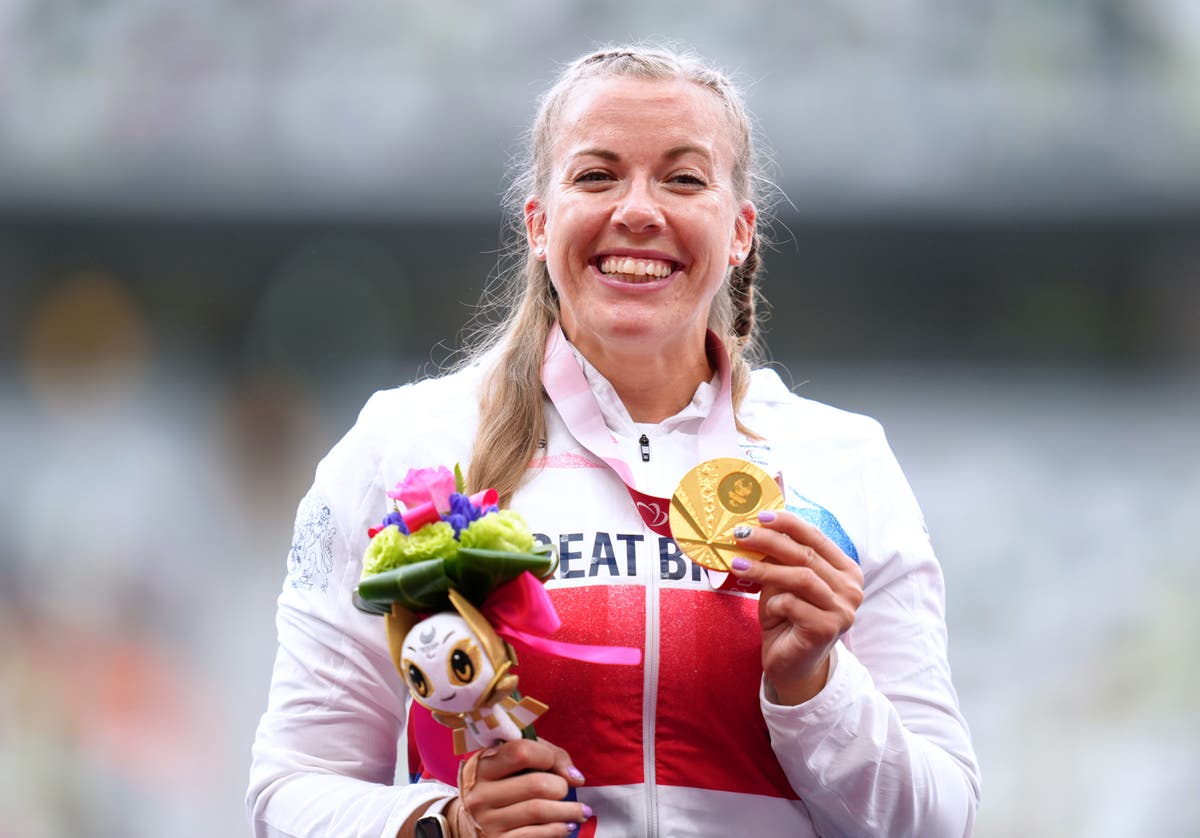 Wheelchair racing star Hannah Cockroft shrugged off a freak injury to smash her own Paralympic record as she cruised to the seventh gold of her glittering career in rain-soaked Tokyo.

The 29-year-old suffered a nasty cut after catching her right hand in her chair less than an hour before dominantly defending her T34 800m crown in testing conditions at the Olympic Stadium.

She sported strapping on the wound, which was also covered by custom-made 3D printed gloves – manufactured by her GB teammate Richard Chiassaro – to provide additional grip in the wet weather.

Yorkshire-born Cockroft feared doctors may recommend a withdrawal but doggedly battled on and insisted she would have been on the start line “even if my hand’s fallen off”.

“To come here with a gammy hand, I’m happy,” she said. “I put my hand through the wheel, while the chair was moving – I’ve never done it before.

“Wheelchairs and rain don’t mix so I slipped off the rim and there’s not really much space to slip into so it went straight in.

“My hand went straight round but luckily a coach was stood with me. It’s pretty bloody but it’s fine.”

Asked if she considered pulling out, she replied: “No. Never. The doctors and everyone looked like they were going to lean that way but I was ‘no way.’

“Even if my hand’s fallen off I was going to be on that start line. My hand’s a bit sore so I’m struggling to grip a little bit so they just tied my hand a bit tighter.

“I was hoping it wouldn’t rain. Obviously it’s been a shocking few days for the rain but there we go.”

Cockroft showed no ill-effects as she once again blew away her rivals.

She powered out of the blocks and finished more than 10 seconds ahead of British silver medallist Kare Adenegan in a time of 1:48.99, before laughing as she declared herself “gutted” to be just 0.12secs outside her own world record, set in Switzerland earlier this year.

American Alexa Halko prevented ParalympicsGB dominating the podium as she took bronze in 2:02.22, just under seven seconds ahead of fourth-placed Briton Fabienne Andre.

Having already retained her 100m title on this track on Sunday, she heads home four golds short of matching Baroness Tanni Grey-Thompson as Britain’s most successful athletics Paralympian after bursting on to the scene with her headline-grabbing performances at London 2012.

Cockroft believes she is capable of even faster track times and would relish an opportunity to work with a Formula One team to further streamline already-exceptional performances.

Her boyfriend, fellow GB athlete Nathan Maguire – winner of a silver in Friday’s 4x100m universal relay – failed to make it past the heats of the men’s T54 800m, a race won by 10-time world champion Marcel Hug, who collaborated with Swiss engineers to design his chair.

“I would love that and love the investment, because if you look at this chair it’s not aerodynamic, it’s not the best it could be,” she said.

“My chair is as light as it can go but what else can we change, down through my helmet, or my gloves or my push technique?

“There’s so many things we could look at but as athletes we don’t have the money to put ourselves in a wind chamber or do any of those things so we’re lucky this time we’ve had these rather snazzy suits [skin-tight kits] made.

“Rich [Chiassaro] went in a wind tunnel and designed these – I then redesigned them for a woman, but we need more like that.

“It can’t happen every four years, it has to happen every year so when we get to that start line we know our equipment is the absolute best. Marcel absolutely destroyed it – what’s to say if Nathan wasn’t in that chair he could have won more medals.”

Although Cockroft remains in a class of her own, Coventry-born Adenegan was satisfied with a second silver behind her compatriot in Japan and hopes to close the gap before Paris 2024.

“I did what I expected and wanted here and to get two season’s bests when it matters shows that all the hard work to peak on time paid off,” said the 20-year-old.

“It’s been a really tough couple of years for all of us, so I’m really pleased with how I performed.

“Hannah sets a great standard but I’m always trying to improve on what I’ve done.

“I improved on how I performed in Rio, so hopefully Paris will be an improvement on what I did this time.”

Attendance boost for lower-league clubs at start of new season