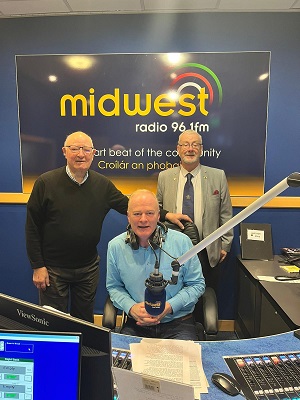 Cllr McNicholas had planned to make the trip as part of his year in office, but tested positive for COVID-19 just hours before he was due to leave.

That meant a long delay, but with the blessing of current Lord Mayor, Cllr Kevin Maton, he paid for the trip in September and took the good wishes of the city to the people of Mayo.

He said: “I was so sorry that I couldn’t travel to Ireland as part of my mayoral year for so many reasons. County Mayo is reputed to be where my family hails from and I’m proud to share the McNicholas name with a lot of people over there, but my trip was also about keeping a promise to an old friend, the late Cllr Jimmy Walsh.

“When he was Deputy Lord Mayor of Coventry, we promised we’d make the trip together, but sadly he passed away and this was a bit of a pilgrimage for me, but I also wanted to make the trip for more official reasons.

“Coventry has always had a strong connection with the people of Ireland. They were amongst the first of our communities to settle here and they have helped us welcome many to our city. They have kept their culture and traditions alive and they have become so important to our city.”.”

As part of the trip, Cllr McNicholas visited the museum dedicated to politician Michael Davitt, and the Peace Park, which commemorates all those Irish people who died in the wars.

Cllr McNicholas, who is working with local historian Basil Burke to try and discover more of his family tree, added: “It was an honour to visit such moving and inspiring places and see how they could maybe support our peace work here in Coventry.

“I would like to thank everyone connected with the trip. County Mayo is described as a place where strangers become friends and it really is beautiful and welcoming. It felt like going home. I will definitely be keeping in touch with the city’s County Mayo Association and helping where I can.”